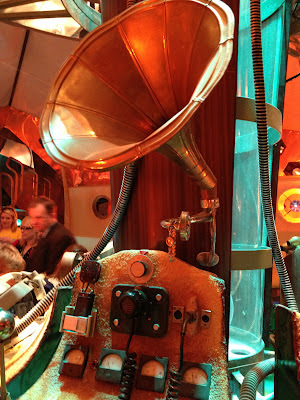 Photo copyright Lisa Hazlegreaves
The Doctor Who catch phrase is a very personal thing.  I’m pretty sure when Moffat sits down with his pen and paper, or more likely his laptop to start writing that he doesn’t think right then I must slip ‘Geronimo’ into the script at least once this week and maybe a ‘run’ or two.  These things just happen like jam on toast or a dog chasing a cat.  They evolve over time, like The Doctor himself.  Now I’m not going to start looking back over the many reincarnations of The Doctor and their many catch phrases, because...well,  because I’ve got a blog a day to write for the next 26 and I also have some semblance of a life that involves feeding my children, my cats and sometimes my partner, if he’s been good.

But let’s have a little look at the past three doctors, number nine was Christopher Eccleston and if I’m honest I don’t think he played the role long enough to have any solid repeated word or phrase.  I do remember him saying fantastic rather a lot and of course this was the series that ‘run’ became forged into our brains as more of a description of the whole series than a catch phrase.  Number ten was Tennant, his was most definitely ‘Allons-y’ and our current Doctor has ‘geronimo’ Some of my favourite phrases from Doctor Who are never even uttered by the Doctor, my all time favourite being ‘hello sweetie’ from  the lovely River Song, who I don’t mind admitting I have a little bit of a girl crush on,  especially when she’s pointing a gun at my eye stalk.  It would also seem to be the case that the enemies of the Doctor have their own unique catch phrases. A lot of these are so intrinsically programmed into our brains now that even non Who fans can probably tell you who says ‘exterminate’ or indeed ‘you will be deleted’ this shows the gravity of the show, how over fifty years it has become wound into the fabric of our culture, not everyone may love Doctor Who but everyone has heard of it, and everyone can tell you what a Dalek is.
In my very first sentence I said that the Doctor Who catch phrase was a personal thing.  I really believe this is the case, it’s not like Only Fools and Horses with Del Boy’s ‘this time next year we will be millionaires’ this was a very definite repeated phrase meant to drill into your brain to remind you of the show.  With Doctor Who and the things he says ‘Come along Pond’ for example, the viewers take these for their own, I’m guessing that if I got a room full of Whovians together and asked them for catch phrases we would all come up with the one or two obvious ones but there will always be certain lines that touch people in different ways and that to them is the prhase that reminds them of The Doctor, and that to me is what good writing is all about, the ability to mould to personal tastes, for people to take out of it what they need...I’m hoping for comments after this, lots of angry Whovians aggrieved because I didn’t mention their favourite catch phrase from the show, this is my point exactly.  Doctor Who is personal to you, to me, to everyone.
Allons-y.
Posted by Felicity Smoak at 10:32

April A to Z Blogging Challenge

Felicity Smoak
Mother of two, one girl, one boy. I have a penchant for the Geek, Kurt Geiger shoes and the odd night of hedonism...Trust me, I'm The Mother.